Book Review: Days of Fire: Bush and Cheney in the White House 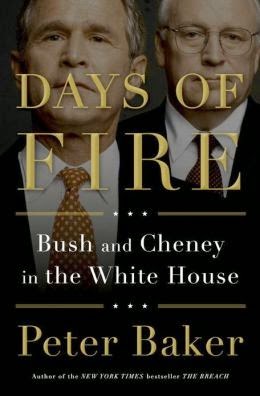 Peter Baker's balanced history of the Bush years (2001-2009) recalls all those great journalistic "you are there" accounts of the presidency from yesteryear.  Baker contends Cheney's influence in the White House never had the cache the media placed upon it.  Most of the book deals with the aftermath of 9/11: a life changing day for Bush and one of grim determination for Cheney.  For what it lacks in historical perspective, Days of Fire explains with painstaking detail the inner workings of the Bush years although some crucial questions go unanswered.

Baker begins the book with a parallel biography of Bush and Cheney before they joined forces in the 2000 campaign.  A native of Wyoming, Cheney flunked out of Yale briefly worked as lineman for the electric company.  Like Bush, he enjoyed drinking, cleaned up his act, and dived into politics.  A protege of Donald Rumsfeld, hawkish Cold Warrior with presidential ambitions, Cheney rose quickly in the post-Watergate Ford administration.  A ruthless bureaucratic warrior, Cheney knew how to stifle dissent in the ranks.  During the Bush 41 administration he ran the defense department and oversaw the first Gulf War.  He opposed marching into Baghdad fearing it would create chaos in the Middle East.

Cheney's grim determination rattle America's saber at any country wore thin. He imagined himself as an American Churchill, evidenced by his personal library.  But Churchill knew about war at firsthand. Would Cheney have thought differently if he had been in the military?

Bush's path to the White House can be read as a natural outcome or a historical fluke.  The son of a President from a powerful political family rooted in the Eastern Establishment, the last name Bush carried weight among the power brokers.  Up until age 40, Bush worked for his father and dabbled in the oil business. He built his reputation as the popular owner of the Texas Rangers and defeated a popular incumbent governor. Bush popularized the term compassionate conservatism, a series of initiatives encouraging the private sector to bring about reforms in education and poverty.  Unlike his father, he declared himself a born again Christian and had a distaste for Washington politics.

Baker provides a dramatic account of September 11, 2001.  Bush appeared confused and indecisive at first, but regained his footing.  Cheney immediately set his sights on Iraq, convinced they were building nuclear weapons.  The war cabinet unleashed the CIA and pursued a policy of no quarter when it came to terrorism.  The initial invasion of Afghanistan went smoother than planned despite their failure to capture Bin Laden.  Meanwhile the administration passed the Patriot Act, a reversion to the bad old days where any form of dissent spelled social ostracism, even more ominous in age resembling 1984.

Baker never provides a satisfactory answer as to why Bush and Cheney decided to invade Iraq.  To a thinking observer, linking Iraq to 9/11 made no sense. Did Bush have a personal vendetta against Saddam?  A drive to right his father's mistakes? Isn't this armchair psychology?  Does history hinge on such interpersonal minutia?  Maybe?

The immediate justification, to prevent the regime from attaining "weapons of mass destruction", came back to haunt them.  Were larger issues of geopolitics involved?  Great game diplomacy?  Later on, the administration's rhetoric linked the war to spreading democracy in the Middle East. Whatever the logic that went into their decision, the consequences were grave.

After Bush won reelection in 2004, Cheney's influence declined significantly. Condoleezza Rice, always close to Bush, took a more moderate approach to foreign policy.  The second term saw one disaster after another as Iraq and Afghanistan dragged on, Hurricane Katrina, a more aggressive Russia, and the 2008 economic collapse.

Bush admitted to feeling emotionally drained by the end.  Who can blame him?  In his final week in the office, Cheney requested a pardon for former aide "Scooter" Libby. Bush refused.  The image of Cheney groveling to his boss reads like something in The Godfather - Tessio begging Mike for one more favor before going to the chopping block.

Arthur Schlesinger's A Thousand Days on JFK emphasized heroism and political leadership, I miss those types of histories.  Accounts of Bush and Cheney (and their successors) will focus on their corporate mindsets and overblown rhetoric of 2002-03.  But I digress, whether you agree or disagree, Days of Fire will shed light on Bush/Cheney years.

Posted by Eric Gilliland at 9:23 PM No comments: 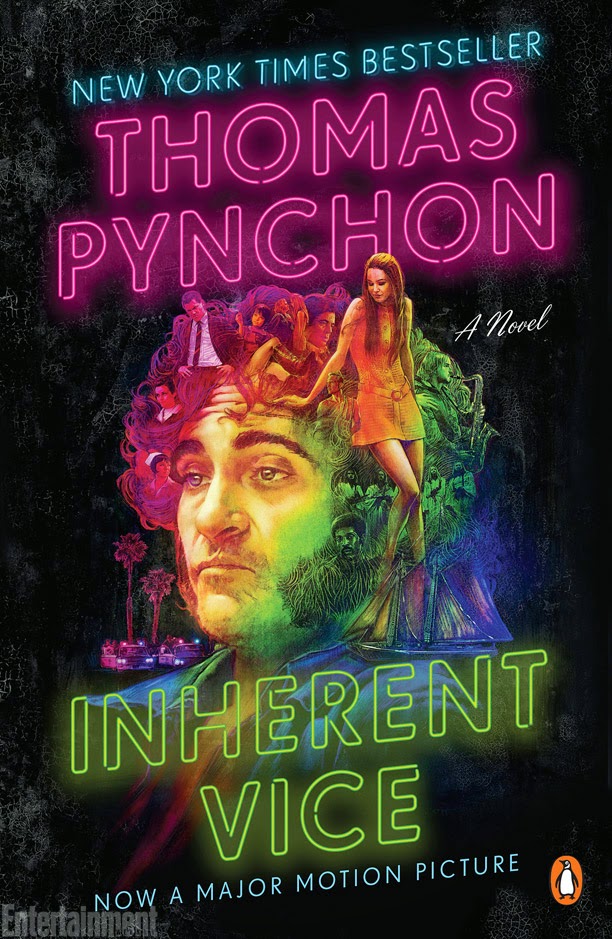 This past week filmmaker Paul Thomas Anderson sat down for a fascinating two hour interview on WTF with Marc Maron.  While they discussed the many highlights of Anderson's career such as the making of Boogie Nights and Magnolia, they also shuffled around the subject of Thomas Pynchon.  For Anderson has directed the first ever adaptation of a Pynchon novel, Inherent Vice, which has gone into wide release this week.

Of all modern writers, Pynchon holds a special mystique.  Few photographs exist of him and he's never granted an interview or made a public appearance.  Nevertheless, his fiction has made a profound mark on the culture.  Every novel is a fun house maze where no one is who they appear to be.  Full of oddball humor and allusions to every subject imaginable, they stare directly into the abyss of "the system."

I recall reading The Crying of Lot 49 sometime after college.  It left a vivid impression. Where does one even go for an analogy?  Imagine a Twilight Zone story concocted by David Lynch done with the elan of a Chaplin film.

I've made several failed attempts at Gravity's Rainbow, Pynchon's 1973 novel of 700+ pages on rockets, mind control, twisted Nazis and many, many other things.  I shouldn't feel too bad, Anderson also admitted to having been unable to finish Gravity's Rainbow, although he has expressed interest in adapting the impossible novel to the screen.

Later I moved on to his debut novel V, a hypnotic tale about randomness and history, a bit of Jack Kerouac and Graham Greene. Pynchon's short story collection, Slow Learner, would be a great staring point for anyone new to his work.  The story, "Entropy," seems a blueprint for the future novels.

Pynchon took a hiatus from publishing novels between 1973-90 and reemerged with Vineland, a California novel set in the mid 80s pitting an aging hippy against a sadistic FBI agent.  I've yet to read the recent novels: Mason & Dixon, Against the Day, Inherent Vice, and Bleeding Edge.

Therefore the release of Inherent Vice is something of an event. When Maron pressed Anderson on whether Pynchon took part in pre-production, he refused to answer with any specificity, "I can't be honest on that question."  When queried on what Inherent Vice is about, Anderson replied, "It's about Pynchon."


So, what do we talk about, when we talk about Pynchon?  Maron summed it as follows: the politics of drugs, the end of the 60s, politics of subversion, the stakes of being a provocateur and the fate of a sell out.  And finally to the question: What is reality anyway? And does it matter in the end?

Maron asked Anderson on whether he's got a response from Pynchon and he sheepishly replied, "I'm waiting on the call."  Anderson then spoke of their being "a weird agreement between them."  To which Maron interjected, "You've become a Pynchon character!"

Maron brought the right attitude to the interview.  Anderson is arguably the best director of his generation and their discussion gave insight into his creative process. I look forward to reading and watching Inherent Vice.

Anderson also talked about having David Foster Wallace as an English teacher at Emerson College back in the 80s.  Coincidentally, Wallace also held Pynchon in high regard. Anderson recalled Wallace being the one teacher he admired and calling him up one night to discuss Don Delillo's novel White Noise.  Another Pynchonian moment!

We now live (or maybe it's always been like this) in a Pynchon world. The year 2015 is the right time, maybe the only time, his work will grace the big screen.  Our brave new world, ever more reliant on technology, paradoxically connects us all, and yet leaves so many feeling disconnected.  And the paradoxes just keep piling up.  Meanwhile unseen chaos happens in the shadows.  And meanwhile . . . A Screaming Across the Sky

Posted by Eric Gilliland at 11:20 PM No comments: