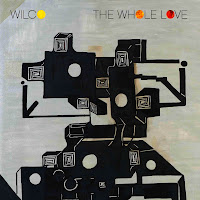 Wilco's newest LP, The Whole Love, is their most satisfying record to date.  Ever since the release of their their decade defining album, Yankee Hotel Foxtrot in 2001, their fanbase has gradually continued to grow.  The history of Wilco is unique and indicative of the how the music industry has changed in the past twenty years.  The Whole Love is a really good album in the tradition of the Beatles.
One of the great ironies of the Chicago based band is that some critics like to scoff at them as the practioners of safe, 'middle of the road' music that pleases a late boomer/gen x demographic.  They began with no certain fan base in mind and continue to work that way.  As an outgrowth of the alt-country band Uncle Tupelo, Wilco began with little fanfare.  Tweedy, considered second to Tupelo's lead songwriter Jay Farrar, has become a highly respected American songwriter.

Being There (1996) A highly ambitious double album that celebrates 1970s classic rock, precursor to the revivial of rock in the next decade. The track "I got you (at the end of the century)" is the best example of a classic rock pastiche.

Summerteeth (1999) A pop extravaganza, height of Tweedy's colloboration with Jay Bennett. Filled with over the top production and haunting lyrics.  But still no hits.

Yankee Hotel Foxtrot (2001)  A landmark record for Wilco that got them dropped by their label and almost broke up the band.  They were dubbed the 'American Radiohead.'

A Ghost is Born (2004) Tweedy's dark state of mind during this record comes through with songs about spiders filing tax returns, a stroll with the devil, coming to terms with addiction, and the loss of faith. Possibly their masterpiece.

Wilco: The Album (2009) Excellent set of songs, but some worried the album was too safe and lacked invention.


The Whole Love combines all the great elements of Wilco's past.  The opening song, 'Art of Almost,' recalls YHF and A Ghost is Born with its dark soundscapes and a mad guitar solo from Cline.  Another highlight is "I Might," a psychodelic organ driven song with Tweedy gleefully singing the chorus, "You won't set the kids on fire, oh but I might."  The Beatles have always been a major influence, especially the White Album.  Their influence is clear on 'Capitol City,' 'Sunloathe,' and 'Whole Love.'
Wilco is an amazing example of a band surviving and making it an increasingly segmented culture where every musical act is marketed to a specific demographic.  They draw upon a number of different influences, no different than Beatles, Stones, or Dylan, and make it their own.  They do it the old fashioned way: make good albums and  play every concert like it's their last. But you still can't hear them on the radio.
Posted by Eric Gilliland at 1:06 PM No comments: