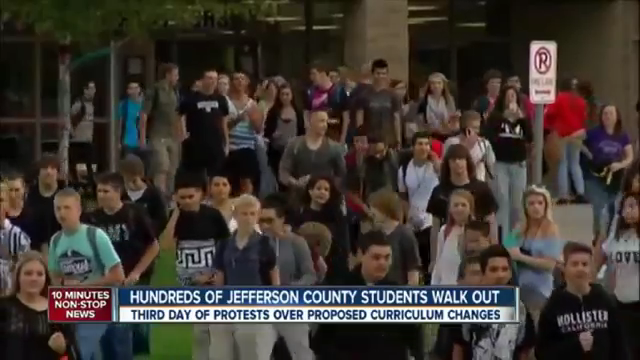 Over the past two weeks High School students in Littleton, Colorado have protested the School Board's attempt to revise changes made to the Advanced Placement U.S. history curriculum. The new curriculum questions the traditional narrative common in textbooks with titles like, "The March of Freedom."  Conservatives see the new material as being too "negative" with units on slavery, oppression of women, the displacement of Native Americans, robber barons, Hiroshima, Vietnam, the disco era etc . . They favor content with a triumphant narrative emphasizing the genius of a free market system, glorious military victories, and "respect for authority."

Battles over history are nothing new. The culture wars of the 1990s came to a fever pitch in 1992 over the 500th anniversary of Christopher Columbus “discovering” America. The once gallant explorer suddenly found himself reduced to an amoral opportunist who introduced genocide, disease, and racism to the New World. Battle lines were drawn. Nowadays, Columbus Day looms as a day of trendy moral outrage and social awkwardness.

Most historians now recognize grand narratives of the past exist only in the imagination of the historian who writes them. You get a version of the truth, but nothing close to "the truth."  Therefore, the teaching of history has evolved into a maze of contradictions and red herrings. Since the 19th century, historians of all stripes have used history to advance political agendas and therein lies the anxiety in this debate.

The fear of indoctrination drives conservative advocates crazy. They suspect a “Progressive” agenda to brainwash students into believing the government is the answer to every social ill. Sure, a curriculum exploring negative aspects of history could lead to a political awakening. But a new generation of bleeding heart lefties? It’s no more indoctrinating than fiercely pro-capitalist, Reagan worshiping material that glosses over the difficult questions.

As Joyce's alter ego Stephen Dedalus observed, "History is a nightmare from which I am trying to awake." I partly agree. To explore the past takes fortitude and an open mind. But don’t fall into despair like Stephen. I applaud the students of Jefferson County taking a stand against a sanitized history curriculum. I would also tell them, don't rely too much on "the system" to set the record straight on the past. Go out and read a few history books on your own. Travel to a historical site. Ask a living person about a historical event.  Get diverse points of view.  And finally, realize history is part of the path to self-knowledge.

Posted by Eric Gilliland at 10:44 PM No comments: