Book Review: Man on the Run: Paul McCartney in the 1970s by Tom Doyle 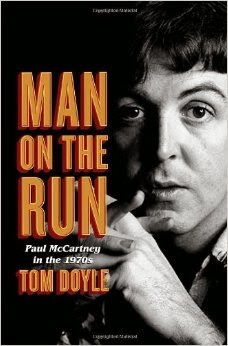 Ever since the demise of The Beatles in 1970 much of the blame unfairly fell on Paul McCartney.  Many critics championed John Lennon as the sole creative force behind the band. Tom Doyle's new book, Man on the Run: Paul McCartney in the 1970s is a sympathetic account of McCartney's struggle to win respect and regain his identity as a solo artist.

Doyle's portrait of McCartney is that of a level headed person in manic pursuit of new creative challenges.  After the Beatles broke up he nearly suffered a nervous breakdown and rarely left his farm in Scotland, "For the first time in his life, he felt utterly worthless . . . He was 27 and suddenly of no use to anyone anymore" (3).  Days and nights were spent drinking to relieve his depression.  Eventually he snapped out of it and returned to songwriting, starting his own band Wings.

Ian MacDonald's epic history of The Beatles Revolution in the Head concluded all the ex-Beatles failed as solo artists.  That's a harsh conclusion and one in need of reevaluation. McCartney released nine albums of varying quality in the 1970s, with many hit singles in between (far more than his old bandmates).  After a string of mediocre albums, which critics joyously ripped apart, Band on the Run (1973) proved a critical and commercial breakthrough.

Doyle's colorful account of the Band on the Run sessions, an album produced in Lagos, Niger, are a high point in the book.  Paul, Linda, their children spent seven weeks in a war torn region of Africa making the album.  One day Paul and Linda ventured out and were robbed at knife point. They also lost their demo tapes and had to rewrite the songs from memory.  One day in the studio, Paul had a panic attack and had to be rushed to a hospital (possibly brought on by excessive marijuana use). Also, local musicians resented Westerners making music in their country. Ever the diplomat, Paul diffused the situation by inviting them to the studio and convincing them he had no intention to rip them off.

Band on the Run produced the hit singles "Band on the Run,"  "Jet", "Helen Wheels", and "Bluebird" which all became staples of FM radio.  Now over forty years old, the album manages to recapture the spirit of a Beatles record.

Paul found stability in his marriage to photographer Linda Eastman and their five children. In 1976, Wings embarked on a triumphant arena tour of America, performing before 67,000 at the Seattle Kingdome.  The tour produced a massive live album, Wings Over America.

As the decade came to a close, the momentum of Wings screeched to a halt.  Their 1978 LP London Town, a collection of soft rock tunes recorded on a yacht, made them sound completely out of touch. Punk and New Wave were reinventing popular music. Nevertheless, they scored yet another hit with the folkie, "Mull of Kintyre."

A major portion of the biography covers the parallel course of John Lennon.  That's the sad part of the story. Doyle believes the two of them never achieved a reconciliation following their bitter break up.  On Lennon's Imagine album he chided McCartney on "How do you Sleep" with digs like "a pretty face may last a year or two/pretty soon they'll see what you can do."  In interviews, Lennon was less than kind to his old partner.


In 1974, John and Paul hung out in L.A. and played together in a drunken jam session and did consider working together again.  In 1976, Saturday Night Live offered The Beatles $500 to perform live on the show. Coincidentally, Paul was visiting John and Yoko that night and they briefly considered taking up the offer (a night fictionalized in the TV movie Two of Us).  Alas, Lennon-McCartney, never wrote another song, much to Paul's regret.

The death of Lennon left him devastated.  A flood of death threats forced McCartney and his family to avoid public appearances for a time.  In 1981 Wings disbanded, and Paul released the inventive solo record McCartney II.  In 1982 he wrote his own tribute to Lennon, "Here Today."

Man on the Run fills a much needed gap in the ever increasing catalog of Beatles literature.  After finishing, you may want to dust off those old Wings records and give them another chance.

Posted by Eric Gilliland at 7:11 PM No comments: