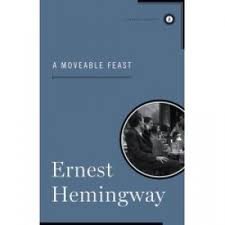 Ernest Hemingway's novel A Moveable Feast, published posthumously, is an account of his time in Paris following the First World War.  He shares anecdotes about his first wife Hadley, F. Scott Fitzgerald, Gertrude Stein, Ezra Pound, and other portraits of those who shaped the arts in the 20th century.  These expatriates found a home  in Paris in the years after the First World War.  Hemingway and Fitzgerald persist as personifications of their time: Fitzgerald remains the chronicler of the upper class and Hemingway symbolizes the old American frontier spirit for the modern age.

A Moveable Feast is fitting to read after watching Woody Allen's Midnight in Paris.  Life there seemed fun, simple, and profound.  Ezra Pound acts as a father figure to young Hemingway, James Joyce is an enigmatic drinking buddy, Gertrude Stein is a sort of muse, his first wife Hadley is kindly and supportive, and Fitzgerald is a lazy neurotic.

At its center is Hemingway, a workmanlike writer who enjoys living life to the fullest: his self portrait combines all the right masculine attributes combined with a sublime artistic sensitivity.  But beneath this persona is a self-destructive nature.  By book's end all his relationships are finished.  He begins an affair with his wife's best friend and eventually leaves Hadley for her.  He recognizes Fitzgerald's genius, but at times the portrayal borders on character assassination or at least an attempt to humiliate his old friend and rival.  Among other things he portrays Fitzgerald as a helpless hypochondriac with an unhealthy attachment to his wife, Zelda. In the novel's longest chapter Hemingway describes a disastrous trip he took with Fitzgerald that turns into a farce -- and to top it off Hemingway uses the incident to explain why F. Scott failed to write anything that measured up to his masterpiece, The Great Gatsby.

As one of his last complete works, Hemingway looks back at a time before he was a living legend.  Day to day life in Paris seemed pretty sweet.  A typical day consisted of writing, betting at the track, philosophizing with great artists, and drinking liters and liters of wine.  As a snapshot of literary history the book is greatly enjoyable, but also for its honesty.

Posted by Eric Gilliland at 2:41 PM No comments: